A number of different bus excursions are offered to Italy and the South Tyrol. In years gone by, half day trips to the cheap alcohol and leather shops of Vipiteno were popular, but, with the open market in the EU rationalising prices, the cultural heritage of Austria's southern neighbour has come more into play.

One of the more worthwhile destinations is the town of Bolzano, the capital of the South Tyrol and now home to Ötzi, the mummy discovered high on a Tyrolean glacier over 10 years ago. Although virtually all of the excursion is on motorways and the distance is not far, heavy traffic and roadworks can slow travel considerably in the summer months and this trip is almost always considered a full day.

The journey runs over the Europa Bridge, the highest in Europe, at the start of the Brenner motorway and up to the pass on the Italian border. The town of Brenner by the former border post once was a busy shopping centre for Austrians taking advantage of the cheaper Italian prices - they still do now, but that has more to do with the large discount brand shopping centre these days. 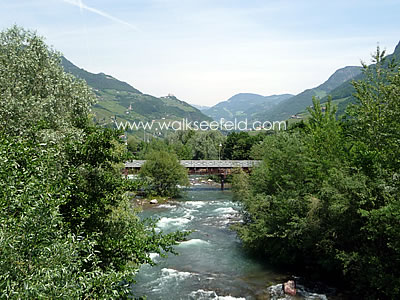 The South Tyrol is a dual language region and all towns and villages have a German and Italian name. The Eisack valley (Val Isarco) is the route which leads to Bozen (Bolzano) and on the journey it becomes obvious from the number of castles and fortresses in the valley how vital control over this area was for rulers to protect their trade routes.

As the Eisack comes to an end, the number of vineyards on the steep hillsides increases and the valley opens out into the wider Etsch and the town of Bolzano. 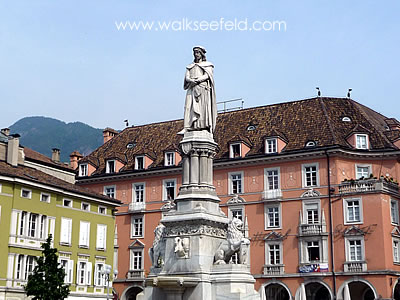 The town was settled in prehistoric times, but became an important Roman settlement and later, under the Bishops of Trento, fought for control of the area with the rulers of the Tirol. During the 1930s the town was heavily industrialised as Mussolini and the Fascist government tried to increase the immigration of poor Italian-speaking workers into the area and nowadays only a quarter of the population is German-speaking.

The town is worth wandering around with the typical South Tyrolean shopping arcades in the Laubengasse and the open air market in Obstplatz. The South Tyrolean Museum of Archaeology is the building which houses the remains of Ötzi, with a fascinating exhibit of theories about how he lived, what he did and why he died. 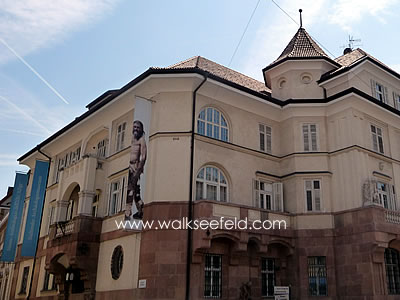 On some trips it may be possible to take a side journey to the wine-producing area of Kaltern and, of course, sample some of the famous red wine produced in the region.

Please note that we do not operate or organise any excursions described on this site - they are usually run by British tour companies - and are unable to give any booking information for them as times and dates are only arranged at the start of the summer!

Back to main day excursions page...

Find hotels, pensions or vacation rentals on the Seefeld plateau.

How to get to the Seefeld plateau by road, rail and air, with maps of car approach routes.

Let us know if you have any questions about the village of Seefeld or the neighbouring area.